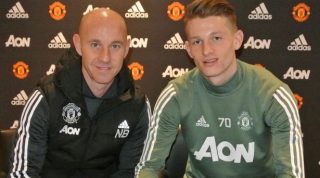 Manchester United u23 defender Max Taylor is recovering well in hospital after receiving chemotherapy for cancer, the club has revealed.

The centre-back, who recently changed his name from Max Dunne, is in the recovery process and will continue to be monitored by United’s medical staff.

Taylor, 19, signed his first professional contract at Old Trafford last year, and club officials hope to see the player back in a red shirt in the ‘foreseeable future’.

”I would like to thank everyone at the club that has helped me since day one,”

“The nurses at the Christie and HCA healthcare, plus Melissa from MacMillan Cancer Support, have all provided me with wonderful care.

“Words cannot describe how much my family has helped me through this. My mum and stepdad Matthew, my brother George, Meir and my girlfriend Lydia, and all the rest of the family, have provided invaluable support,” Taylor told ManUtd.com

United’s official statement read: ‘Everyone at the club is thrilled with the positive update on Max and he will continue to receive our unwavering support at Manchester United.’

Taylor signed for his boyhood club in 2014 following a successful trial period. He made his reserve team debut for United in a draw against rivals Man City at the Etihad and was part of United’s Premier League North winning side in 2016/17.

#MUFC Under-19s defender Max Dunne has revealed why the Reds' trip to Belgrade was so important to the squad.

Everyone at Stretty News would like to wish Max a full and speedy recovery from his treatment.