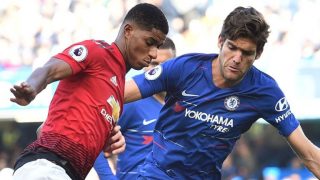 Manchester United went back to losing ways midweek after suffering a 2-0 defeat against Paris Saint-Germain, but Monday night will see the Reds attempt to get back on track with a win over Chelsea in the FA Cup.

It was caretaker manager Ole Gunnar Solskjaer’s first loss in charge of United, though a win over the Blues will put him in a strong position to deliver a trophy at the end of the season.

United last won the FA Cup in 2015 when Louis van Gaal’s side beat Crystal Palace in the Dutchman’s final game as United manager. He was sacked immediately after the triumph.

READ MORE: Man Utd’s need for a Director of Football is clear, so why does the long wait go on?

You could argue United were brought back to reality by PSG, even though it was always going to be a difficult tie against stronger opposition.

Monday’s game depends on how we bounce back from Tuesday’s disappointment. Despite playing away from home, we have less reasons to fear Chelsea who are at a low point, suffering a 6-0 hammering away to Manchester City in the league last weekend, though in their most recent outing they picked up a narrow 2-1 victory against Malmo in the Europa League.

Ross Barkley scored after 30 minutes and Olivier Giroud got a crucial second for Chelsea in the second-half. Malmo responded too late, pulling one back through Anders Christiansen with 10 minutes left on the clock of normal time.

The question is how hard will that Champions League loss knock United?

We will be without Jesse Lingard and one player in line to step in, Alexis Sanchez, has ultimately flopped since signing for the club last January.

It’s a massive game for both teams considering how close they are in the table while fighting for a Champions League spot, which is something Chelsea do not want to think about after missing out last season.

A defeat for Chelsea could see their season go up in flames, where United have Liverpool in the league after this encounter. Neither side can afford to lose ground in the Premier League.

This period will present a number of tests for Solskjaer. And, it may go for or against him getting the job on a full-time basis.

The players are enjoying themselves under Solskjaer and he’s been getting the best out of them. This is the first time they find themselves in a situation needing to respond after losing a game under this manager.

I’m confident knowing Chelsea already appear to have problems with new boss Maurizio Sarri. And, from watching them recently, it doesn’t look like 1) all players are playing in the right positions and 2) they don’t look to fully understand what is being asked of them.

That alone sounds more damning than losing 2-0 against PSG in the Champions League.

Solskjaer has shown in two big away games against London opposition — Arsenal and Tottenham — that he has tactical nous to stun managers with more experience.

Moreover, United have simply been in better form over the past month. There’s not enough evidence to suggest we will struggle after one game.