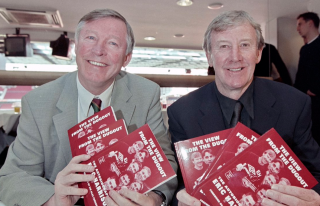 Waking up to the news of Eric Harrison passing away, I scrolled through my Twitter feed taking in all the lovely tributes.

After being diagnosed with mixed dementia four years ago, Harrison, 81, passed away peacefully on Wednesday night, surrounding by his family.

We are extremely saddened to report that our former youth coach Eric Harrison passed away last night. Our thoughts and prayers go out to Eric’s family and friends at this sad and difficult time. pic.twitter.com/vS94a8MKxr

Gary Neville led the tributes with an emotional tweet, paying respect to the man he holds responsible for being a mentor, coach and helping him and other young footballers go from being boys to men.

Neville and his brother, Phil, both came through the Manchester United academy and worked under Harrison. The Neville brothers went on to become first-team players and were very successful at United, especially Gary, who captioned the club towards the end of his playing career.

We’ve lost our mentor , our coach and the man who made us. He taught us how to play , how to never give up , how important it was to win your individual battles and what we needed to do to play for Manchester United Football Club. Eric we owe you everything ❤️ pic.twitter.com/iv0uisTGCl

Coaches at youth level play a key role in shaping footballers for their later years, and everyone at Manchester United had a soft spot of Harrison, who was also responsible for shaping the Class of 92, readying the likes of David Beckham and Paul Scholes for first-team football.

His legacy will forever be part of United’s history, laying solid foundations with a good youth academy. Sir Alex Ferguson made in clear with his tribute message to Harrison that it wasn’t just about the Class of 92, Harrison developed many a good player for the manager to keep an eye on.

According to Oliver Kay of The Times, when David Beckham heard Harrison was ill, he baked a carrot cake with his children and drove 400 miles (round trip) to Halifax to see him. That shows the esteem former Manchester United players had for their former coach, Harrison.

Sad re Eric Harrison. For a hint of the esteem in which ex #MUFC youth players held him, his grandson got in touch with some of them to tell him he was ill. David Beckham baked a carrot cake with his kids & drove to Halifax (400-mile round trip) to see him https://t.co/YFF5vEvFay pic.twitter.com/49gX4H9Yjk

Former United player Danny Higginbotham also paid his respects by crediting Harrison for his influence as a football coach. Everyone

Eric Harrison was a wonderful coach for players coming through @ManUtd and helped produce some of the best but as much as anything he taught you how to conduct yourself and make that step from boy to man. A fantastic influence on so many including myself. RIP Eric.

We are extremely saddened by the news. Our thoughts are with Eric’s family and friends during this difficult time.

Below are more tributes to the great Harrison.

“When Sir Alex took over he wanted a vibrant new system. We had Whiteside and Hughes come through. And he looked at me with those steely eyes and said ‘that’s not enough’. Within, and I’m not exaggerating, within a month he trebled the scouting system at MUFC.” Eric Harrison.

Such sad news to hear of Eric Harrison’s passing-he was an integral part of my education-not only in football but life in general-hard work, commitment and respect. A brilliant mentor to whom I owe-as others before and after me do-so much. Thank you Eric, may you rest in peace xx

Sir Alex Ferguson pays tribute to Eric Harrison:
“Eric’s contribution to football and not just at Manchester United was incredible. When I came as manager I was lucky enough to have Eric on the staff as head of youth development.” pic.twitter.com/sGBzRxMmtO

Gutted to hear the news about Eric Harrison thoughts are with his family,he was a lovely man 💔

Eric Harrison, we will be forever grateful. RIP.

🔴 A true club legend who will never be forgotten! #mufc pic.twitter.com/Qxd9evCa5e

Eric Harrison, one of footballs greatest people has sadly passed away. Responsible for the development of The Class of 92 and so many other great players that came through the @ManUtd academy he was one of the clubs biggest heroes. RIP Eric pic.twitter.com/gainlxov5u

RIP Eric Harrison. A proper, old school tough coach. Some of his methods were hard to understand being a young kid, but he was simply preparing you for a tough road ahead as football isn’t easy. Many things learned from him have been carried forwards in my life’s journey. pic.twitter.com/mLkPsmNaAn

David Beckham says we have lost “the man who made us”, after the death of Eric Harrison. pic.twitter.com/g8HSihqbd3

Can’t underestimate Eric Harrison’s importance to this football club. Eric was largely responsible for bringing through and mentoring one of the most gifted generations of players this club has ever seen in the class of 92. Top man who won’t be forgotten. RIP Eric. #mufc

Saddened to hear of the news that Eric Harrison has passed away. He was a great coach who would always take the time to listen and offer great advice. What you’ve done for the club is incredible and your legacy will live on through many you’ve coached and mentored

Such sad news to hear about my former youth coach Eric Harrison’s passing. A born WINNER which he installed in all his players RIP Eric

Impossible to underestimate Eric Harrison’s role in making United great during the Sir Alex Ferguson era. Coached one of England’s greatest youth club sides and largely responsible for numerous other successful careers in the game. #mufc

Eric Harrison’s immense legacy is all around. It’s there in the Class of 92, great players now doing great things in punditry, management, youth-development & club ownership. A wise, kind man, hugely respected. Thoughts with his family, friends & the many players he nurtured. RIP

Sorry to hear the passing of Eric Harrison, worked with Eric when he was Mark Hughes’s assistant with the Wales National team.. lovely man. RIP Eric 🙏🏻

RIP Eric Harrison. Always remember my Dad asking me in the late 80’s why I cared so much about United when ‘none of the players are from Manchester anymore’. Thanks to Eric that changed in the 90’s, and that success, with a core of homegrown players, will never be repeated.

Sad news this valentines morning with Eric Harrison MBE passing away at the age of 80 … the class of 92 was the result of his hard work #RIPEric #mufc 🙏🏼 pic.twitter.com/BHCPhjYA2c