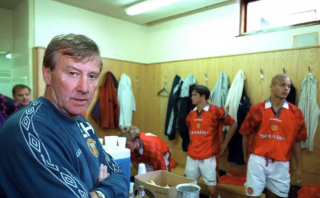 Desperately sad news filtered through media channels this morning relating to a true Manchester United legend. On this day where love is the prevailing message, outpourings of love were sent in the direction of the late Eric Harrison, who has sadly passed away at the age of 81.

Harrison was diagnosed with dementia in 2015 but was said to have passed peacefully with his family in attendance by his side.

Tributes have been flooding in from those fortunate enough to have tapped into his knowledge and ways of life, academy graduates Gary Neville and Danny Higginbotham were among the first to pay their respects.

Harrison is widely acknowledged to have not solely been a football coach, but also a life coach in the grander scheme.

But it was in 1992, that year so deeply and indelibly etched into United’s DNA and history where Harrison’s work bore fruit: Harrison nurtured some of the England’s finest crop of young players into Youth Cup winners. This was the launchpad they needed to believe they could make the step up into senior men’s football and ingrained that winning mentality into them from an early age.

The likes of Beckham, Giggs, Neville and Scholes all went on to secure club legend status and had careers most footballers would envy and only dream of.

Gary Neville references the style of play, winning individual battles but more importantly how not to give up even in the most precarious situations. That has been the hallmark of great United sides down the years, that spirit, hunger, pride, passion, honour. Danny Higginbotham alluded to the greater transition from boy to man was aided by Harrison’s beliefs on conduct.

Harrison was awarded a MBE in December 2017 after 27 sterling years’ work at Old Trafford. For a man to receive such recognition, playing a relative background role behind the scenes is testament to just how big an impact he had on a lot of hopeful, young men with the sole desire of playing one game for United, let alone achieve everything in the game with them.

By all accounts, Harrison was a wonderful man, whose loss will hit everybody associated with the club hard.

In a week which brought disappointment on the pitch, Harrison ought to be remembered in the right way with a fitting performance against Chelsea.

Let’s finish the rest of the season strongly for Eric, get into the top four and win the FA Cup.

Harrison’s beliefs are ideals which many are wishing to see restored in this current side and something Ole Gunnar Solskjaer is evidently aware of: The pride in the shirt, preaching the ‘United’ way on and off the pitch, never saying never or throwing the towel in. That has been lost somewhat in recent years but is slowly back on the right path.

United will always be indebted to you and your work. You will never be forgotten.