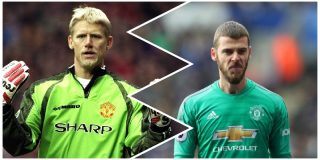 Manchester United goalkeeper David de Gea is the best in the world.

His rise to stardom has prompted comparisons to Danish legend Peter Schmeichel.

After struggling to adapt to English football when he initially arrived from Atletico Madrid in 2011, De Gea has since established himself as one of the best keepers to play for Manchester United.

Schmeichel was long considered the greatest United keeper of all-time, but is De Gea better?

The question was put to the former United goalie on beIN SPORTS.

“I don’t think I can compare myself to David de Gea,” Schmeichel said.

“I’m Danish, half Polish, he’s Spanish, two different worlds. We speak two different languages, but what a fantastic goalkeeper he’s turned out to be, and he can carry on for many years for Manchester United.”

Schmeichel won a lot more as a United player than De Gea, but it would be unfair to hit the Spaniard with that stick considering how he’s saved us countless times during the post-Ferguson era. Our positions in the table most seasons since Fergie’s retirement have been questionable, though it would have been a lot worse if De Gea wasn’t still at Old Trafford.

The former Denmark international won five Premier League titles, three FA Cups and a Champions League during his eight seasons at the Theatre of Dreams.

Edwin van der Sar was another great Manchester United goalkeeper. He too deserves a mention!