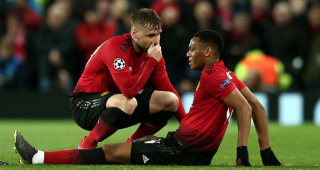 A disappointing night at Old Trafford saw injuries expose a lack of depth in the Manchester United squad.

After an unbeaten streak of 11 matches, United lost their first game under caretaker manager Ole Gunnar Solskjaer. It was bound to happen at some point and it comes as a reality check for anyone who reckoned the Norwegian was a miracle worker.

A decent display in the first-half was totally cancelled out by United’s second-half performance. Jesse Lingard picked up an injury, as did Anthony Martial, and both were replaced before the game resumed after the interval. The Reds became clumsy and inconsistent against Paris Saint-Germain, who were by far the better side, deserving a 2 away goal advantage going into the second-leg.

PSG scored twice thanks to goals from Presnel Kimpembe and Kylian Mbappe, the latter who should have been sent off for multiple fouls before his opener, but Mbappe running with the ball at his feet really is a sight to behold. It was a kick in the teeth that former United sulk, Angel Di Maria, was reasonable for assisting both goals. He enjoyed it so much he ran towards the United fans before shouting ‘f**k off’.

The Ligue 1 champions became the first French side to defeat United away from home in European competition. It was also the first time PSG and United met in competitive competiton.

Here are three things we learned from Manchester United’s 2-0 loss against PSG.

Much of the talk prior to the first-leg focused on the absence of Neymar. However, Thomas Tuchel’s side did not allow missing their best player get in the way of Tuesday’s performance at Old Trafford. PSG were better on the ball, technically significant and still had Mbappe up front to cause havoc. United were unable to call on their best player too, but the difference between the two teams was clear.

PSG set up to man-mark Pogba in the middle, and Marquinhos did a really good job at that. While the France international showed glimpses of brilliance, particularly in the first-half, he wasn’t able to lead by example and drive his teammates forward like he’s done over the past month.

Moreover, he was sent off towards the end of the match after receiving a second yellow card, though on replay it looks like he got away lucky escaping a straight red.

An ineffective display but the Frenchman can respond on Monday evening when United take on Chelsea in the FA Cup. The question is will teams now look at different ways to stop the World Cup-winner?

Once Jesse Lingard and Anthony Martial picked up knocks they were replaced by Juan Mata and Alexis Sanchez. The pair, who were initially benched for the game, offered little to re-energise an already lacklustre United.

It took such an affect on the game that United were totally outclassed after half-time, with PSG fans taking the piss with jeers at they dominated possession towards the end, with a 2-0 win in the bag.

We’ll have an update on Lingard and Martial’s injuries once the club or Solskjaer speaks to the press.

Are United out of the Champions League?

Solskjaer won’t rule out a dramatic comeback and we’ve previously seen PSG bottle it in the Champions League. Two away goals and a clean sheet in the take the game to extra-time, but what United really need is a 3-0 win.

Last night would do anything but fill you with confidence, though United have nothing to lose going into the second leg. Solskjaer already has one foot out of the competition, despite only managing his first Champions League, so why not go out all-attack and try score an early in France and see what happens?

It’s probably too much to ask for but, as Solskjaer showed as a player, anything is possible in football.