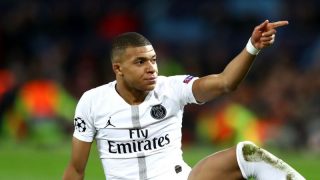 Paris Saint-Germain forward Kylian Mbappe believes he would have killed the tie had David de Gea not been able to prevent him netting a brace.

Mbappe put PSG 2-0 up at Old Trafford an hour into the game and had another chance to make it three just minutes later, but the United goalkeeper was able to use his arm to stop the French giants scoring a third away goal.

“We are annoyed because we could have scored a third,” Mbappe told RMC, as quoted by the Manchester Evening News. “I think with a third it would have been over. I am going to prepare myself to score another in the second leg!”

Despite conceding two goals, De Gea was probably still our best performer on the pitch, while United only managed one shot on goal at the opposite end. Arsene Wenger used that to explain the difference between the two sides.

Mbappe running with the ball at full pace is a sight to behold. Without question he’s one of the best footballers in the world, with a Ballon d’Or on the cards if he keeps progressing.

PSG were without their main man Neymar for the tie but Mbappe, 20, was still not fazed by the job at hand on his first appearance at Old Trafford.

Even at the World Cup last summer, when Mbappe was 19, he had the world at his feet and looked a truly exceptional talent. It’s one of the reasons I didn’t find Neymar’s absence that much of a boost in United’s favour.