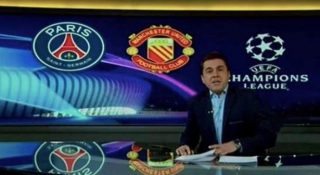 Manchester United vs Paris Saint-Germain in the Champions League will be broadcast in countries across the world.

Including Iranian TV, although with a twist…

Since 1973 Manchester United have sported a devil on its crest. It’s become iconic in the club’s branding and even features influentially in adverts shown on MUTV.

Clubs are always finding ways to update the design and image of their brands, but the general look of United’s has remained the same for some time.

Before the devil became part of the Manchester United badge, the crest represented the Manchester Ship Canal, and mentioned the helpful fact we’re a ‘football club’.

Iranian TV has made a decision to use United’s badge from 1972 during their broadcast for PSG’s trip to Old Trafford.

Why is Iranian TV showing the Manchester United badge from 1972?

Satanic symbols are forbidden in Iran and United’s branding falls into this banned category.

But this is not exclusive to the 20-times champions of England.

AS Roma’s badge was censored last year because it shows Romulus and Remus suckling from a wolf.

So, yeah, there’s why you won’t see the United crest on Iranian TV later.