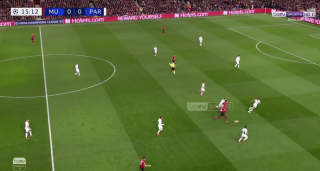 The France international has been man-marked by PSG stand-in midfielder Marquinhos, who preferably plays at centre-back but Thomas Tuchel has been forced to shoehorn the Brazilian into the middle to make up for absentees.

The Ligue 1 champions have been pressed high up the pitch by United and are looking nervy as a result.

And, Pogba almost opened the scoring after a sublime run into the box after leaving Presnel Kimpembe for dead. The 23-year-old defender looks nervy since picking up an early yellow card for a foul on Marcus Rashford and was not prepared to take Pogba out before he entered the box.

A low drive from Pogba followed and it appeared a difficult shot for Gianluigi Buffon to catch, but the Italian did enough to keep the score level.