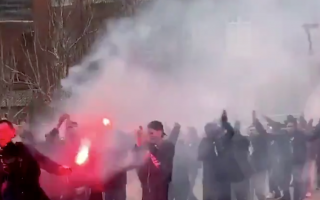 If you enjoy footage of football ultras and seeing lots of pyro, sit back and check out what Paris Saint-Germain fans have been getting up to in Manchester ahead of Tuesday’s Champions League clash at Old Trafford.

United have turned their season around since the draw was made, having picked up an incredible 10 wins and a draw from their first 11 games under caretaker manager Ole Gunnar Solskjaer.

A win tonight would see Solskjaer become favourite to keep the United job beyond the season, if he isn’t considered so already.

PSG go into the game having picked up 6 wins from their last 7 games across all competitions, though they are without star players Edinson Cavani and Neymar, who will both be big losses against United.

Thomas Tuchel’s men shouldn’t struggle to create, though, having Kylian Mbappe, Julian Draxler and Angel Di Maria in the line-up.

The French fans have not allowed the loss of key players to dampen their spirts as PSG ultras took to the streets of Manchester, with footage below of their chanting and use of pyro having since gone viral on social media.