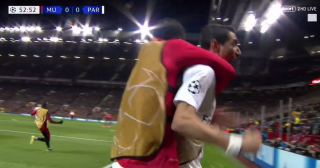 Angel Di Maria has provided two assists for Paris Saint-Germain but after initially taking the lead, the former Manchester United attacker had a message for the Old Trafford faithful.

The Argentina international was wasteful in the first-half and even received a rollocking from Ashley Young, but he’s been crucial in PSG’s second-half display, providing two assists as the French giants lead 2-0 thanks to goals from Kimpembe and Mbappe.

However, when celebrating Kimpembe’s goal Di Maria appeared to have used some questionable language in the direction of United fans.

Di Maria has been booed every time he’s touched the ball, so he really enjoyed Kimpembe scoring against his former club.

He certainly won’t be on our Christmas card list this year!