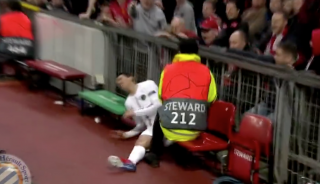 Angel Di Maria is not a popular figure at Manchester United.

The Argentine spent one season at Old Trafford and struggled to settle before leaving for Paris Saint-Germain.

Former manager Louis van Gaal probably didn’t help matters, but there’s no denying Di Maria was a flop at United as we only seen glimpses of his best. Nowhere near enough.

READ MORE: PSG ultras take to the streets of Manchester ahead of CL clash

At Old Trafford tonight, Di Maria has been booed every time he touches the ball, and he’s been woeful too, giving possession away far too often.

However, Ashley Young made his mark on Di Maria towards the end of the first-half when the England international pushed him over the line. He was lucky to get away with not getting sent off.

But we loved Young’s gesture. He’s earned that new deal by showing up Di Maria.

The fans reacted the foul, which Young was booked for, by singing the left-back’s name. They clearly enjoyed it too!