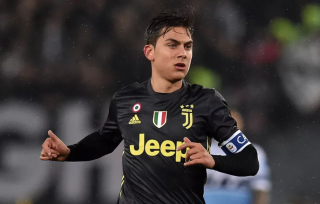 Real Madrid are reportedly lining up a bid for Juventus playmaker Paulo Dybala.

The Argentina international has scored just two league goals this season and has found himself on the bench for Juventus’ last two fixtures.

Dybala only played seven minutes in those games and was an unused substitute for the first match against Parma which ended 3-3. He reacted by leaving the bench before the full-time whistle when it was clear he was not going to be brought on.

You’d imagine that didn’t go down well at Juve…

According to AS, Real Madrid are preparing a move for the forward in the summer.

It is said that they’re considering a huge €120 million bid for the striker, who has been long linked with a move to Manchester United as well.

The Sun claim Chelsea and United are in the running for Dybala’s signature, yet neither club is aware who will be manager next season, so sanction such a big signing would be a push at this early stage.

Dybala is rather friendly with United midfielder Paul Pogba from their time together in Turin. If it goes down to the wire and the Reds are genuinely interested, perhaps the pull-factor of playing with the Frenchman could swing in our favour.

The 25-year-old is an excellent footballer. We seen as much in the Champions League group stages this season as Dybala showed he has the ability to change games with special moments.

My only concern with these rumours are that if true, where will the money come from to sign a world-class centre-back? A specialist winger is needed on the right and Dybala is not one of those.

The Glazers and club may be making tons of money, but you’d be naive if you think they’ll fund a £200m+ transfer spree this coming summer.

Meanwhile at Los Blancos, Isco and Gareth Bale have uncertain futures, and that could make the La Liga club extra keen to beat United and Chelsea to Dybala’s signature.

Bale scored his 100th goal for Real Madrid at the weekend against Atletico Madrid, but he’s still injury prone and hasn’t been able to fill Cristiano Ronaldo’s void.

Whereas Isco seems to be one of those players liked by certain managers or drastically pushed out of the team by others. He played some of his best football under Zinedine Zidane, who remains out of work after leaving Madrid after winning a third consecutive Champions League.