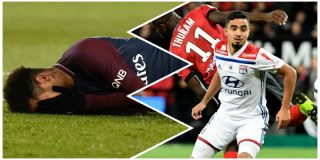 Rafael remains popular with the fans after playing for United between 2008 and 2015.

Still at Lyon, Rafael has his own Champions League tie to look forward to next week, against La Liga champions FC Barcelona.

Lyon recently stunned PSG in Ligue 1 and Rafael reckons this should generate a hope that Thomas Tuchel’s side can be beaten.

You can bet your bottom dollar Rafael will be sat down tonight cheering on the Reds.

“We won against them 2-1 the other week, and you can do it,” Rafael told United Review. “If United play their football, they can win the tie, definitely. I missed the game against PSG because I had an operation, and I have been out for two months, but I hope to be back very soon.

”I watched and you could see that PSG can be beaten. In France, you cannot speak bad things about PSG because they are a fantastic team. But, to be honest, they are not in a good moment. They had a problem with [Adrien] Rabiot because he is maybe going to leave in the summer and he is a good player for them.

“Neymar is injured as well, so it is not the best moment for them. For United, I think it is the opposite, with the games they have been winning – United now are in a very good moment. I think it will be a very good game to watch.”

It’s going to be the biggest European night at Old Trafford in years and after the draw was made, nobody thought we stood a chance.

Rafael, who won three Premier League titles with United, states the obvious by saying they can be beaten. Of course they can! PSG have yet to get very far in the Champions League despite all the millions they’ve spent, so our players need to go out fighting and ensure they win every second ball.

But the Brazilian will never forget his time at Manchester United and we won’t forget him!

“Lyon is a great city and this is a very good club as well,” he added. “So I’m really enjoying myself. I’ve been here three-and-a-half years but, of course, I still love Manchester United. Everyone knows. I must come to visit one day.

”I see some things on social media from United fans and I get very happy. It makes me very glad when I hear from United supporters. Of course, United means a lot. We have that phrase: ‘Once a Red, always a Red’, and I will always be Red. It’s just fantastic. The club gave me everything. I played for them, won titles, it was an amazing time in my life.

“I talk with Fletch [Darren Fletcher], Rio [Ferdinand], Patrice [Evra], Chunks [Tom Cleverley], [Antonio] Valencia, Chicha [Javier Hernandez], so quite a few players I played with. It’s always nice to hear from them.”