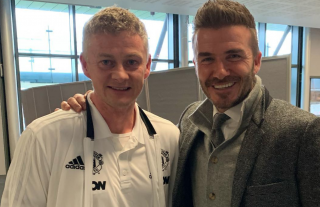 David Beckham is back in Manchester and we can only assume he’ll be at Old Trafford tonight to watch his two former clubs go head-to-head in the Champions League.

Becks shared a photo with former teammate and current caretaker manager at Manchester United, Ole Gunnar Solskjaer, whist expressing his delight to be back in familiar company.

“So good to be back in Manchester & so happy to see THE BOSS @manchesterunited,” he captioned his post on Instagram.

The former England captain won six Premier League titles, two FA Cups, and one Champions League all after coming through the youth system at United.

He went on to have an incredibly successful career elsewhere winning domestic titles in Spain and France, as well as the MLS Cup in 2011 and 2012 with LA Galaxy.

Beckham was also runner-up for the Ballon d’Or award in 1999 as Barcelona’s Rivaldo tipped him to the biggest individual prize in football.

Despite representing both clubs during his playing career, we’ve no doubt Beckham will be rooting for a United win tonight.