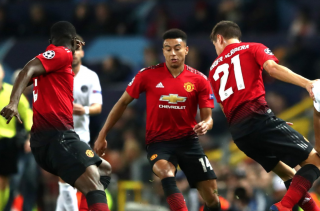 As a dreadful night for Manchester United comes to a close, we rate each player from the Paris Saint-Germain defeat. Perhaps telling that David de Gea scores highest, while a couple share the lowest rating of three.

READ MORE: Solskjaer warns that PSG defeat is not season defining; refuses to accept tie is over

The match ended 2-0 in favour of the visitors but could very well have been four if it wasn’t for de Gea. He was a master in the second half as United ceded control of territory and gave away many chances.

Barring his discipline to hold di Maria off brilliantly, Young was poor on both ends of the pitch, bafflingly failing all six of his cross attempts once again, according to WhoScored, and losing Angel di Maria for Paris Saint-Germain’s second goal.

He can’t really be faulted for the second goal, and as such he can look up and try to improve on Monday at Stamford Bridge.

Matters were not made easy for Lindelof, who was put under pressure many times by his teammates, but to only take a yellow card and few significant errors from that display is not the worst end result for the Swede.

It seems he’s a scapegoat for United fans and I’m not entirely sure why. Shaw kept Dani Alves and Julian Draxler in check throughout the match and it is no surprise the glory came from Juan Bernat an di Maria on the other side of the pitch.

Matic was clinical in the opening 20 minutes of the game but he quickly petered out. His insignificance to matches when United are on the ball completely nullifies his game because he should be creating more chances. Also completely lost Presnel Kimpembe in the box for PSG’s first.

Herrera looked solid in the press, got up to his usual defensive work and didn’t give the ball away much at all. But questions still remain as to whether or not he has the passing ability to compete with Europe’s best.

One flaw with United’s side that needs to be addressed is the inability to involve Pogba in key moments and help him shrug his marker. The red card was questionable, sure, but it was likely as inconsequential to United’s season as his impact on the pitch tonight, and that’s not entirely his fault.

Lingard gave away the ball far too many times for his own liking. His tactical importance to the side is very clear through his industrious work, which was ever-present in the first half, but, like Matic and Herrera, there are questions as to whether he should be a starter for one of Europe’s top sides.

As much as Rashford failed on many occasions tonight and disappointed with his ability to win some simple duels, the demands for him are really not fair at the moment. Romelu Lukaku was the man signed to fill his shoes and for whatever reason, isn’t doing it; that Rashford has been thrown in and succeeded immensely should not alter the expectations for a player who is still a prospect.

Like Lingard, his absence in the second half was clear as PSG had a much easier time and were able to focus more on Pogba in his absence. Martial could have been a key player but was denied by injury, and the midfielders were struggling to involve him in the first half.

Good grief. He has no future at United from the left-wing, so either try a position change or move him out of the squad and promote youth who can be the future.

The same applies to Mata, who isn’t a right-winger and it has never showed more. As the clock winds down, he may be considering bidding farewell to the club which adores him, and it may not be the wrong decision.