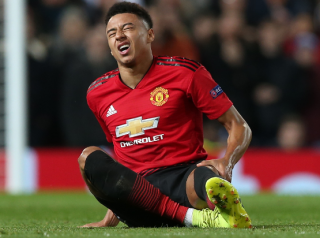 Manchester United suffered a double injury blow in their Champions League first-leg clash against Paris Saint-Germain, with Jesse Lingard initially forced to limp off with a suspected hamstring problem.

Shortly before Lingard went off injured, Anthony Martial appeared to have picked up a knock and was also replaced before the second-half.

The France international was then replaced at half-time by Juan Mata, and Lingard made way for Alexis Sanchez prior to the interval.

United are in great form at the moment and caretaker manager Ole Gunnar Solskjaer will hope neither injury is serious, potentially keeping both players in the treatment room for a significant period of time.

Solskjaer’s got a busy schedule ahead of him too and will need his best players available for the FA Cup tie against Chelsea followed by a Premier League clash versus rivals Liverpool, who are genuine title contenders this season.

If United are to finish the season strongly, Solskjaer cannot afford injuries to creep into his squad, with Arsenal and Chelsea just behind the Reds fighting for a Champions League spot.

Hopefully, the Norwegian will give us a positive injury update at full-time.

It’s Lingard who has to go off. Sanchez on.

Juan Mata replaces the injured Anthony Martial after the break.