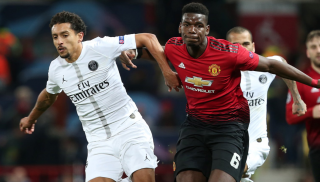 Manchester United have been beaten 2-0 in the first-leg of their Champions League matchup with Paris Saint-Germain.

Goals from Kimpembe and Mbappe were both assisted by former United player Angel Di Maria, who had a message for the Old Trafford faithful after the opening goal.

The Argentine shouted ‘f**k off’ while PSG celebrated Kimpembe’s goal.

It was the first defeat suffered under caretaker manager Ole Gunnar Solskjaer, who was forced into making two substitutions before the second-half because of injuries and that contributed to United losing pace and a lot of shape.

Paul Pogba was sent off at the end and will miss United’s trip to Paris for the return leg. A massive blow for United and the France international.

Obviously it’s always disappointing to lose a football match, and tonight Solskjaer saw his unbeaten run as United manager come to an end.

It doesn’t change the fact we’ve improved beyond belief over the past month and the Norwegian should still be considered for the full-time job.

Here’s how United fans reacted to the 2-0 defeat at full-time.

We’ve improved loads but we’ve got an awful long way still to go. Bit of perspective given, more needed from us lot now rather than overreaction

Referee has been absolutely embarrassing tonight.

The referee has been nothing short of a disgrace!

How has Pogba been sent off but not Kimpembe? Where’s the consistency…

United weren’t at the races in the second half. Scoreline is probably fair.

But the bookings and the red card for Pogba. Ridiculous officiating.

Really disappointing night. Just expected so much more from the team. Tbf, the game plan when totally out of the window when Lingard and Martial went off. We were using their pace and then had to make do with Sanchez/Mata, who couldn’t be more different.

Man Utd 0 PSG 2 FT. No complaints about that – the better team won and could have won by more.

Dissapointing result but no need to overreact. Tonight shows what we knew and what we need, major investment in the summer. Let’s hope our board will do it, otherwise it will be very hard to win the big titles in the next 3 years. With Ole our future is positive! #mufc #MUNPSG

– Utd still nowhere near Europe’s elite
– Martial/Lingard going off killed momentum
– Sanchez awful again
– Pogba sent off, Kimpembe should have been off too
– Utd stopped pressing after 30 mins
– Like last season, UCL hopes killed by 10 mins of chaos at OT pic.twitter.com/SS0jsXSJD8

Terrible second half from United

Mata and Sanchez no replacement for Martial and Lingard. Likely too much to do in the second leg…#MUFC #MUNPSG

When Lingard/Martial went off Utd zeroed