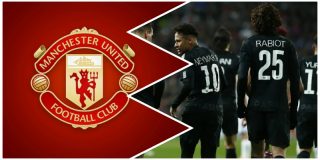 Manchester United have joined the race to sign Paris Saint-Germain midfielder Adrien Rabiot, according to reports.

The wantaway star is set to leave the Ligue 1 champions on a Bosman deal at the end of the season, and he’s likely to attract plenty of attention between now and then.

According to Spanish outlet AS, cited by The Sun, United are the latest club to show interest in the France international, who would undoubtedly improve our midfield.

READ MORE: Marcus Rashford vs Thiago Silva: 5 reasons we could be about to witness one of Man United’s great Champions League nights against PSG

Rabiot won’t feature against the Reds in Tuesday’s Champions League meeting at Old Trafford. He was not named in the travelling squad, as reported by the Manchester Evening News.

Not being part of the squad despite PSG’s ongoing injury crisis gives clear indication that manager Thomas Tuchel has given up hope of keeping Rabiot at the club, and is now headed into a huge European tie without the Frenchman and other key players, although the reason for the midfielder’s absence differs to Neymar and Edinson Cavani, both whom are injured.

He has been casted out of the squad since refusing to sign a contract extension – not featuring for PSG since the beginning of December when he came on as a substitute against Red Star Belgrade.

United should be looking to sign a new midfielder or two to make up for numbers and quality after selling Marouane Fellaini to Chinese Super League outfit Shandong Luneng Taishan. Rabiot would certainly be a better fit than the Belgian, especially if Ole Gunnar Solskjaer gets the manager’s job on a full-time basis, as reported by The Sun.

He would likely come into the starting line-up and replace Ander Herrera, who has shown great form of late but realistically should be a squad player if United are to really push on over the coming years. Rabiot is also younger, aged 23, and has a higher ceiling for development than the Spanish international.

But there should be concerns over the player’s attitude if there is unwillingness to play him in the biggest game of PSG’s season thus far when Tuchel is already without some of his best players.

The Sun’s report adds that Arsenal and Tottenham will all chase his signature once the summer transfer window reopens. A separate story from the same outlet stated that Rabiot has already turned down a transfer to Spurs because he wants to join Jurgen Klopp at Liverpool.