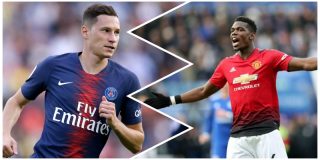 Paul Pogba has been in the form of his life since Ole Gunnar Solskjaer became interim boss at Manchester United in December, but German midfielder Julian Draxler is confident his side can keep him at bay.

United go into the game beating Fulham 3-0 on Saturday, continuing Solskjaer’s unbeaten run as MUFC boss to 11-games across all competitions.

READ MORE: Concerning stat for PSG ahead of trip to Man Utd in the Champions League

A stunning stat but one that could be subject to a serious test tonight against the French giants.

Solskjaer will hope Pogba can be as instrumental as he’s been over the course of the past month, with his brace against Fulham taking his tally to 11 goals in the Premier League this season, a personal best for the World Cup-winner.

PSG are missing some key players ahead of the Champions League clash after Neymar and Edinson Cavani were ruled out with injuries.

“They have got some great players at Man United, especially in midfield, with Pogba and Mati,” Draxler said, as quoted by Goal. “They will be key in the game.

“But we’ve got a lot of quality, too. Our players are more than capable. We stopped Paul sometimes in games between Germany and France.

“We’ll see what he does. He can do everything, but we’ve got players capable of stopping Paul.”

It sounds like PSG’s game plan will be to try mark Pogba out of the game, but with the form he’s in they’ve an all-mighty task.

Marco Verratti only returned to the PSG squad at the weekend and was a doubt for the game, so it remains to be seen whether the Italian is 100 per cent fit or not, and that could make it easier for Pogba to operate in midfield.

The German winger adds that they need Angel Di Maria at his best in the absence of Cavani and Neymar.

“I was asking him [Di Maria] some things about Man United, but I won’t tell you what he said – it was nothing bad! We will need him without Cavani and Neymar. Hopefully, he gives a good performance.

“I don’t really know what position I will be playing, but I’m comfortable in lots of positions. I’m not the same type of player as Neymar and, clearly, we’ll miss him. I’ll try to put in a great performance.”