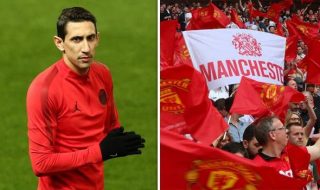 Angel Di Maria is not a particularly popular figure around Manchester United.

The Argentina international came to Old Trafford in 2014 when United were managed by Louis van Gaal.

It never seemed like he wanted to be in Manchester and had a manager who got him to play worse. There was nothing going for him, but you could tell inside there was a sensitive lad who needed psychology, and the right setting.

READ MORE: Concerning stat for PSG ahead of trip to Man Utd in the Champions League

Di Maria only scored 3 goals in 27 matches for United – a year to forget.

But tonight Di Maria returns to Old Trafford for the first time since leaving the club for Paris Saint-Germain. In Paris he is considered a key player, and coupled with the French side’s absentees (Neymar and Edinson Cavani) ahead of the match, he could be played further forward.

The winger spoke to the press prior to PSG’s away leg against United, thanking God for his move to the French giants.

“They never allowed me to do my best there,” Di Maria said, as quoted by Gianluca Di Marzio. “I had problems with my coach, but thank God I managed to come to Paris Saint-Germain, where I returned to my old self.”

Make no mistake about it; Van Gaal was a disciplinarian and his managerial methods raised a number of eyebrows during his time at United.

Di Maria certainly wasn’t the only United player to have an issue with the former Netherlands coach, who has been out of work since getting sacked by the Old Trafford club in 2016.