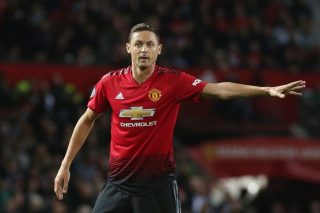 Nemanja Matic knows what it takes to win the Premier League and the midfielder is optimistic about Manchester United’s chances next season.

The Reds climbed into the Champions League spots after beating Fulham 3-0 on Saturday. That result was followed by Chelsea suffering a 6-0 thumping at the Etihad, which saw them drop to sixth in the Premier League.

READ MORE: Man Utd board decide on next manager, announcement to follow in the summer

Former Chelsea midfield anchor Matic won the Premier League twice at Stamford Bridge – 2014-15 / 2016-17 – and has the experience required to be part of a title-winning side. He could become an even more influential figure in the side after rediscovering his best form a month ago under Solskjaer.

United were 11 points adrift of the top four when José Mourinho was sacked in December, but Solskjaer now has the Reds in fourth ahead of Arsenal and Chelsea.

“We knew that if we win then we will be in fourth,” Matic said, as quoted by the Belfast Telegraph. “Of course, Chelsea have one less game, but we are happy.

“We played well, we fight for each other. Clean sheet, we scored three goals.”

Matic believes this rejuvenated United side could force a title challenge next season.

“To win the league you need to win the games like we did in the last seven, eight games.

“So you need to win six, seven games in a row, then you can drop some points, to draw, to lose one game.

“This is the way to fight so if we play like this for the next season then we will be one of the teams who is going to fight for the title.”