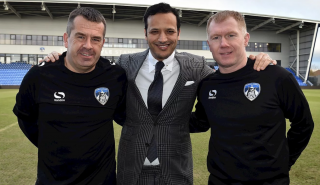 It makes me feel old, seeing all these players I grew up watching make the transition into football management. Paul Scholes has become the latest member of Manchester United’s Class of 92 to take up a position as a boss, as he was appointed manager of boyhood club Oldham Athletic on Monday.

The 44-year-old signed an 18 month contract at Boundary Park with the League Two team. The move proved to be a sticking point for the EFL as Scholes held a 10% stake in National League Salford City, and league rules prevent a person holding different roles at two clubs simultaneously.

Best of luck to Scholesy in his new role as first-team manager of @OfficialOAFC! 👍 pic.twitter.com/oVH2q66Bur

But Scholes was cleared to take up the role and comes in with the Latics 14th in the fourth tier. His only previous coaching experience came as part of United’s backroom staff during Ryan Giggs four game spell as caretaker after David Moyes was sacked in 2014.

READ MORE: Scholes: Berbatov was raving about Anthony Martial in 2015

What about the Rest of United’s Class of 92? Scholes at Oldham, Giggs at Wales and Phil Neville at the helm of the England Women’s national side. Nicky Butt is still at United as Head of Academy, David Beckham has just bought a share of Salford and the older Neville brother Gary has not been involved in football since his ill-fated spell at Valencia in 2015.

Scholes made 718 appearances for Manchester United, including 499 in the Premier League, and scored 155 goals in all competitions.

We wish Scholes all the very best in his new role at Oldham.