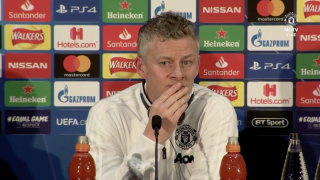 Ole Gunnar Solskjaer has constantly been asked about getting the Manchester United job on a full-time basis.

The Norwegian arrived as caretaker manager in mid-December and is currently on an 11-game unbeaten streak across all competitions, including away wins over Arsenal and Tottenham.

Journalists, however, are doing their best to build a narrative which has been boosted by Solskjaer’s work to date.

Now he’s very much a contender for the job on a full-time basis, with The Sun claiming earlier today that the United hierarchy have decided he is the right man to stay at Old Trafford.

But Solskjaer has never opted to directly answer questions about him remaining United boss beyond this season, while still appearing desperate to get that offer.

He gave a more clear answer at Monday evening’s press conference at Carrington.

Ole on taking the job: “You need to change your script, you’ve had so many ways of asking that question. There are still many months left of tis season for me to do whatever I can for this club.”