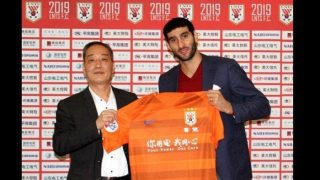 Former Manchester United midfielder Marouane Fellaini has revealed why he left the club during the January transfer window.

The Belgium international left for Chinese Super League side Shandong Luneng towards the end of the transfer period, approximately a month after José Mourinho was sacked and replaced by caretaker manager Ole Gunnar Solskjaer.

Mourinho was a fan of Fellaini as a player, whereas with Solskjaer it never looked like he’d fit into the Norwegian’s more attacking system with reliance on quick and technically gifted footballers.

Fellaini spent over five years at Old Trafford after joining the club under David Moyes. Unfortunately for the midfielder, though, many people feel he epitomises life after Sir Alex Ferguson at the club.

Nobody lost sleep over Fellaini’s departure, but it does leave United light in numbers across midfield if any of the favoured three – Nemanja Matic, Ander Herrera and Paul Pogba — pick up an injury.

“It was the right time to leav,” Fellaini told Telefoot, as quoted by Get Football News France. “I wanted a new challenge, a new adventure, and the time had come.”

Fellaini’s exit came out of nowhere. He had just signed a new deal in the summer, one he didn’t deserve, but the club used that to get a transfer fee in return for his signature.