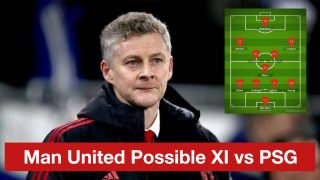 The Champions League returns this midweek and ties don’t come much tougher than this one. Man Utd’s ‘reward’ for only a second place finish in the group stages sees us pitted with the Parisian giants of Paris Saint Germain.

United face Thomas Tuchel’s side – missing Neymar and Edinson Cavani – at Old Trafford on Tuesday and Ole Gunnar Solskjaer’s line up at Fulham gave us several clues as to his selection.

Here is how we think the Reds could look for the first leg.

Of course, a no brainer. Dave has refound his form behind a newly solidified back four under Ole but should expect a busy night at the office. Undisputably number one, it will be intruiging to see whether he gets the nod for the Cup tie with Chelsea.

Fresh from signing a new one year deal, Young is Ole’s first choice right back with Matteo Darmian and Antonio Valencia out of favour. Will likely be up against ex United man Angel Di Maria down the right. Might need help from those ahead of him to keep PSG’s potency in check. His absence from the squad at Fulham, with Diogo Dalot getting the nod, suggests that Young will start here.

Rested at Craven Cottage, so it seems likely that the Ivorian will start against the French heavyweights. Having fallen out of favour under Jose Mourinho, Bailly is now first choice (when fit and available) to start at centre half. His partnership with the ever improving Victor Lindelof has shown signs of coming to fruition with the nadir at Brighton now a distant memory. Like his defensive cohorts, calmness and composure will be needed to give United a platform to cause an upset.

This lad has continued to go from strength to strength. Left out against Fulham with a minor knock, Ole has said that the Swede should return in time for this one. Lindelof has grown into the role of a Man Utd defender and has started to even show signs of leadership. Has to start against PSG, but he’ll need to remain concentrated and focused throughout what will be a testing night.

Shaw has made the left-back spot his own now. He’s going to need help so expect that whoever starts on the left flank ahead of him to track back and help out. Shaw will be up against one of the brightest talents in world football, the shining light of 20-year-old Kylian Mbappe, in a battle between two of the best young players in the game. Shaw started the season like a train, and although that early dynamism has plateaud slightly, it’s great to see him finally fulfilling his potential.

Herrera is not the most skillfull or gifted player but there’s no denying his influence on Ole’s United. His energy, industry and work rate as an expert of  “the needle” makes his an undervalued asset in the engine room. Offers bite and edge like no one else can. Taken off late on at the weekend to save him for this. Herrera’s absence was keenly felt against Burnley recently, he is the type of player everyone would want in their team, but one that no one wants to come up against. Could well be given a man to man marking job.

The Serbian’s struggles under Mourinho were well documented and he perhaps unfairly became a scapegoat. Not a player to kick United on to the next level in my view, but he has enjoyed a renaissance – like so many – under Solskjaer. Shown glimpses of the form he first showed when he arrived at Old Trafford. A steady Eddie, Matic will be facing Marco Verratti in a battle that could go a long way to deciding the outcome of the tie.

Quite simply United’s main man – creator, destroyer and string-puller in chief. Pogba faces his home nation’s dominant force, and – for all of his majestic recent form – the spotlight will be on him. Pogba’s main criticism has often been a failure to perform against the best, but he is the best midfielder in world football right now. For all the talk of PSG’s absent big guns, United have several match winners of their own and Pogba should be given licence to wreak havoc on an injury hit Paris Saint-Germain side.

An unused sub at Craven Cottage, Lingard is another who, like Herrera, has seen his influence go under the radar. The only reason to rest him at Fulham was surely to save him for this tie. Bursting with energy and pace, Jesse could end up having to do a fair bit of defensive work down his side to help Young against Di Maria. He doesn’t get enough credit but Lingard has done little wrong. Will surely return to his favoured left wing role, or could even be used as a false nine as we’ve seen recently against Arsenal and Spurs.

Romelu Lukaku toiled tamely as his stand in during a rare outing at Craven Cottage as Rashford was handed a breather. There is no question that Rashford – in the best goalscoring form of his fledgling career – is another man key to United’s hopes of victory. Both teams have two of the quickest forwards in world football at their disposal, but in 41-year-old Gianluigi Buffon, Rashford will have to beat one of the best in the business. PSG won’t fancy the idea of facing a red-hot Rashford playing at a level approaching world class. His influence will be vital.

Solskjaer may have been tempted to go with Alexis over the Frenchman, given the Chilean would be more willing to track back. Sanchez was also left out at Fulham, which may have fuelled the idea he will start vs Tuchel’s men. But we think that Martial will be given the nod, and Solskjaer would be hard pressed to leave him out. Scored a wonderful solo goal against the Cottagers, but he’s unlikely to find life that easy against opponents with the calibre of PSG. He won’t be given the time and space on the ball like he was on Saturday, so is going to have to work hard and make the most of his opportunities when they come. Solskjaer has found a settled line up in seven weeks more than Mourinho ever did in two and a bit years, and Martial is a massive part of it.