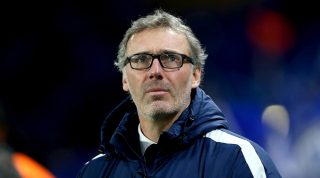 Blanc has not managed since being in charge of Paris Saint-Germain, United’s upcoming Champions League opponents, but that role ended back in 2016.

“I had a call from a director, I’d prefer not to say who, and some discussion,” Blanc told The Times.

“But I was in Paris so it was very difficult for me to leave. We kept in touch but they went with Van Gaal in the end.”

However, our understanding of the situation in December is Blanc had his entourage put his name in the ring, rather than United making the first approach. He also wanted the job on a full-time basis rather than coming in as interim boss.

Blanc is looking for something different after spending his entire managerial career to date in France.

He turned to management in 2007 when he tookover Bordeaux and won Ligue 1 in 2009, as well as the Couple de la Ligue and Trophee des Champions the same season.

“Managing in England is a big ambition,” he added. “I have big experience at Paris.

“It’s difficult for me to go to another club in France. I want a different challenge in England, Spain or Italy. I played in those countries, I know them, so I keep going to games and I see what calls come in.”

Blanc sounding a bit on the desperate side about returning to management, but you can’t blame him for that and there aren’t many options in France after managing PSG.