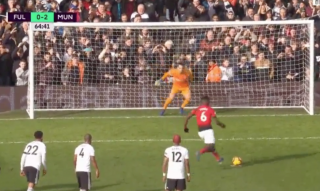 Paul Pogba fired home from the penalty spot as Manchester United took their lead to three goals over Fulham in the Premier League.

Juan Mata won the penalty after he was bumped over in the box by Le Merchand in rather clumsy fashion.

A two-goal lead is always dangerous so United needed a third to put the game to bed.

Pogba took his tally to 11 goals in the Premier League after netting his spot-kick.

It’s only a matter of time before people start talking about Pogba being one of the best midfielders in the world, which was the aim for United when they re-signed him from Juventus in 2011.

This result puts Fulham’s Premier League future is real doubt as the Cottagers face an uphill climb to exit the relegation zone.