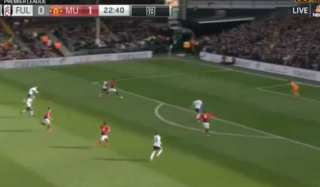 Manchester United have doubled their lead against Fulham in quick succession.

A fantastic individual goal from Anthony Martial saw the Fulham goalkeeper beaten at his near post for a second time in the first half.

The Frenchman dribbled his way through Fulham’s defence before comfortably slotting the ball past the keeper, who has had an awful afternoon this far.

Fulham face an almighty uphill climb if they’re to find a way back into the game now, with Manchester United set to rise from fifth to fourth in the Premier League.

United’s first goal came from Paul Pogba as the midfielder struck a powerful effort from a tight angle into the roof of the net.

Another goal before half-time and United should put this game to bed.

Perfect preparation before taking on Paris Saint-Germain in the Champions League, and what a way to celebrate a new five-and-a-half year contract!