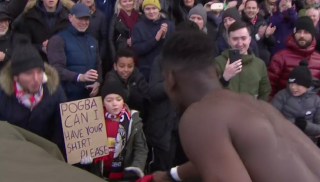 Paul Pogba was the driving force behind Manchester United’s 3-0 win over Fulham in the Premier League.

The Frenchman scored a brace against the Cottagers and showed incredible pieces of skill throughout the game.

He is starting to see the best form of his life under caretaker manager Ole Gunnar Solskjaer after falling out of favour with former manager José Mourinho.

Pogba’s first goal saw a stunning strike as he struck from a tight angle and looked to have blown the roof off the net.

Anthony Martial doubled the lead in the first-half with a stunning solo goal, beating two defenders and slotting the ball into the bottom corner.

The third game from a penalty when Pogba stood up cool as a breeze before adding to his tally for the season.

After the match, Pogba showed his class off the pitch by handing his shirt to a young supporter in the stand.

See the footage below.

The kid in the 2nd row getting an early insight into how life is full of near misses with Pogba’s shirt at the end there 😂#Pogba #MUFC pic.twitter.com/ktMP46FzWW

Paul Pogba heads to the crowd to give his shirt to a fan 👏🏼 Class @paulpogba #mufc pic.twitter.com/nrv6GihD2b