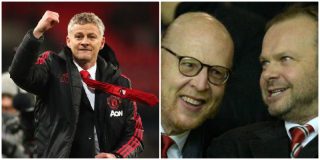 It has emerged that Ole Gunnar Solskjaer’s agent met Manchester United executive vice-chairman Ed Woodward and co-chairman Avram Glazer during the 3-0 win on Saturday at Fulham.

Glazer was spotted by TV cameras sat alongside Woodward but Solskjaer’s representative Jim Solbakken was also in attendance and spoke with the United suits, as per Manchester Evening News.

With Manchester United yet to announce who will be full-time manager next season, news of this meeting is potentially significant considering the incredible job Solskjaer has done thus far.

The Reds are still unbeaten under the Norwegian coach, winning 10 of his first 11 games in charge, with the only setback being a 2-2 draw with Burnley at Old Trafford.

While Woodward is spotted at every game, the Glazer family are rarely seen.

Solskjaer revealed after the match he met with Avram Glazer: “Well I’ve just spoken to him outside. He came into the dressing room. Of course they’re all happy after winning the game. Who I meet and when I meet people is not really up for me to tell!”

Every win makes Solskjaer a strong candidate and if United can secure Champions League football for next season by finishing in the top four, a task dismissed by previous manager José Mourinho, he stands a good chance at landing the job on a full-time basis.

The Glazers and Woodward ought to be impressed by the work he’s done over such a short period of time. More people will start calling for him to get the job soon.