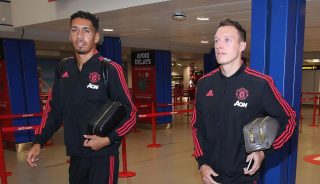 Manchester United fans on Twitter have questioned some of Ole Gunnar Solskjaer’s decisions following confirmation of his line-up to face Fulham in the Premier League.

It’s not a weak team by any means but with Romelu Lukaku and Juan Mata taking up two of three attacking positions, it’s hard to see where pace will come from other than the left where Anthony Martial starts.

On another note, the caretaker manager’s call to start Chris Smalling ahead of Eric Bailly raised some eyebrows. The Ivorian is struggling to secure a place in the United line-up, which was also the case under former manager José Mourinho.

You can’t please everyone with team selections and Solskjaer may have one eye on Tuesday night’s Champions League encounter against Paris Saint-Germain.

Although, the Reds have a great chance of finally get back into the top four this weekend with a win over the Cottagers. Then we’ll stay in fourth as long as title challengers Manchester City beat Chelsea on Sunday.

United fans had their say on the starting eleven. See below.

Jones & Smalling at the back, Mata on the wing, Lukaku up front. pic.twitter.com/3wPJr2owFk

Bailly and Lindelof rested. PSG are not ready for this.

as long as Herrera Matic Pogba are in the lineup we fine.