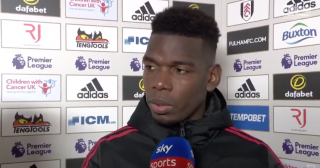 Manchester United were eleven points off top four with the Champions League a distant dream when Jose Mourinho was sacked in December.

In an extraordinary turnaround under Ole Gunnar Solskjaer, no one has epitomised the upturn in form quite like Paul Pogba. Pogba was at his brilliant best again in United’s 3-0 win at Fulham.

In another man of the match showing, he scored twice – including a penalty – as the Reds moved up to fourth with victory at Craven Cottage.

Speaking to Sky Sports afterwards, Pogba said United must continue this form and that there is still a long way to go in the season as the race for the Champions League intensifies. Pogba said that the side must stay there and that interim manager Solskjaer “gives joy to everyone”.

“It feels great. That’s what we wanted since Ole came, we talked about the top four. We are there and we want to stay there now.”@paulpogba joins @GeoffShreeves post match.