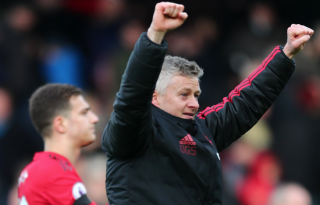 Manchester United head into Tuesday’s PSG clash still unbeaten under Solskjaer and can take confidence leap-frogging Chelsea in their own backyard. In truth struggling Fulham were never really in the game and were totally dominated by a rotated team that looked in total control.

Solskjaer could afford to rest the likes of Lindelof, Lingard and Rashford and still had more than enough to deal with an overly physical Fulham.

Not really troubled today, Mitrovic foul aside David had little to worry about in the first half. Pulled off a smart save to his left from a long range effort from Callum Chambers but Fulham never looked like denying De Gea a welcome clean sheet. Mitrovic angled a header in the second half but it was dealt with comfortably and there was sense of inevitability about Babel’s miss from one yard out, which was suitably cheered by delighted travelling Reds.

Nervy beginning, got caught out of position a little too often and generally looked better going forward. This is a young man still finding his feet at United, he did pick out Pogba with a delightful through ball late in the first half. More to come from Dalot, Ashley Young however was not missed today.

Old octopus arms was back, really is difficult to see how he gets away without giving away more penalties. However, this was a comfortable return from injury for Smalling, unlikely that he will be playing on Tuesday but he will be happy just to be back.

With a new deal in his back pocket, Jones was out to prove doubters wrong today. Difficult to believe I am writing this, but he had a storming game. Set up Martial beautifully for United’s second and came agonisingly close to helping reduce his goals deficit with a raking 20 yard effort that was just tipped over the bar. We need to give him a new contract every week.

Didn’t look particularly strong in the tackle today, played quite deeper than we are used to. He had a lot on his plate with the dangerous Schurrle and Mitrovic leading the Fulham attack but kept them at arm’s length without really doing too much.

Cast a frustrated figure today, highlighted by his first half booking. Played quite a forward line in phases but like Herrera was subject to some physical tackles from Fulham that seemed an all too common feature of their approach today. At times looked good going forward but took a knock in the first half, hopefully will be fine for PSG.

Herrera and Matic were in a bit of a battle in the middle of the pitch, got caught on the ball a few times in the first forty-five but can count himself unlucky with a 63rd minute strike that Fulham were fortunate not to concede from.

At the heart of everything that was good from United today, imperious display that was topped off with a delightful strike early on to give the Reds our opening goal in West London. Latching on to a perfect through ball from Martial, Pogba netted from a tight angle high into Rico’s net. Kept his composure for another stutter-step pen that was struck into the bottom corner to give United a comfortable lead mid-way through the second half. Brought off 15 minutes from the end, is going from strength to strength under Ole.

Plenty of running but largely anonymous in a first half that was dominated by Pogba and Martial. His industry paid off however and a loose tackle by Marchand in the box, earned Mata a penalty from which United scored to go three up.

Made one, scored a beauty in a game where Martial saw a lot of the ball. United clearly targeted the left channel and Tony took full advantage. After setting up Pogba for United’s opener, a surgical through ball from Phil ‘Pele’ Jones put Martial clean through on goal, he left the Fulham defence floundering and a smart finish topped off a really classy move. Martial set to prove the English press wrong for another five years, at least.

Either Lukaku has lost a bit of weight or he was wearing a larger shirt today in game where he fed off scraps. He had limited opportunities, failed to convert in a congested box following a Martial pass that would have been better placed for Pogba. Second half was still a struggle but a dart on the right wing, reminiscent of the Arsenal game, was followed by a pass to Mata that resulted in the penalty.

Phil Jones supplied Sanchez with a chance just after coming on in the 70th minute,  but other than that did not excel.

Failed to convert from a chance set up by Sanchez, but came on and did a job.

Had little time to impress in a game that had been long since won by the time he came on.