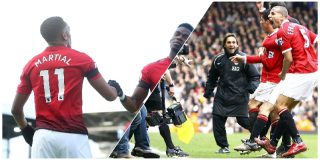 Ole Gunnar Solskjaer made six changes to his side for Manchester United’s trip to Fulham on Saturday.

The Reds won the game 3-0 thanks to a brace from Paul Pogba and a stunning individual goal by Anthony Martial.

Fulham had two good opportunities at the beginning of the game but were unable to keep their momentum as Pogba netted an opener just 14 minutes in.

But it was Martial’s goal for our second that has people talking and making significant comparisons.

Starting a run from his own half, the Frenchman dribbled past two defenders before placing the ball into the bottom corner.

It was a great goal from the 23-year-old, who recently signed a five-and-a-half year deal to commit his long-term future to Old Trafford.

The goal reminded a lot of spectators of a famous finish Cristiano Roanldo scored back in 2007.

A touch of Ronaldo at Fulham 2007 there from Martial. Scintillating stuff. #mufc

That goal is reminiscent of Ronaldo 12 years ago at Fulham!!! What a goal from Martial #MUFC

Martial’s goal was scarily similar to Ronaldo’s strike against Fulham in 2007. 👏🏽 👌🏽

What a goal from Martial. Resemblances of Ronaldo goal all those years back at the same ground. #FULMUN