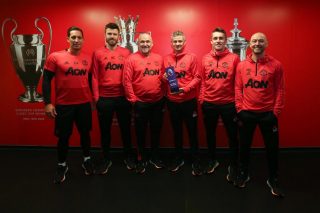 Solskjaer becomes the first United manager since Sir Alex Ferguson to win the award; a feat the Scot last achieved in October 2012, and his former player has done so in his opening month as caretaker boss.

Supporters hailed the 45-year-old on social media after news broke Solskjaer had won Manager of the Month.

The Norwegian coach remains unbeaten since taking charge of United, with claims mounting to see him get the job on a permanent basis.

We think he a genuine contender for the role which was unthinkable a month ago when Tottenham manager Mauricio Pochettino was (and probably still is…) considered the front runner.

While the results are significantly better, the players are playing the way United should with the shackles off. He walks around the place smiling and talking about what it means to manage this great club, a complete opposite personality to that of former manager José Mourinho.

Loving the fact that’s he’s posing with his backroom team as well! #olegunnarsolskjaer

And so he should be … nobody else even came close!

Nobody deserved it more. OGS, congratulations. 👏🏾

Since Ole came in.

Man United are unbeaten in 10 games.

Pogba in a better form.

Ole Solskjaer is named as Manager of the month for January.

And many more stats. #audusports #PL

ole is the right man for the job