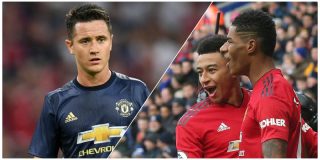 Even when Marcus Rashford appears to struggle, everyone knows he has the potential to become a real star at Manchester United.

To be fair, it’s probably safe to considered him a star already, and his form of late backs up that argument.

Teammate Ander Herrera believes the forward has the potential to become ‘unstoppable’ in a Red shirt.

Rashford has netted six times in ten games under Ole Gunnar Solskjaer, with United still unbeaten under the Norwegian coach.

Since Solskjaer came in the gap between United and the top four has been cut from 11 points to two.

The England international is one of a number of players who have benefited from a new lease of life under Solskjaer, and Herrera believes the best is yet to come from Rashford, January’s Premier League player of the month.

“He’s different,” the Manchester United midfielder told ESPN. “We know at that moment there are some fantastic wings in modern football: [Ousmane] Dembele, we have also [Raheem] Sterling who is a fantastic player, Anthony Martial, Eden Hazard… but I think Marcus is different.

“Marcus can shoot, Marcus can do one-against-one but he has also the quality to continue and not lose the ball for the team.”

You’ve got to agree with everything Herrera has said about Rashford, though there is room for improvement.

If and when he improves his decision-making and become more clinical in front of goal, Rashford will become a 20+ goal a season player. One or two of those in the squad and the Reds will be able to force a title charge.

“I couldn’t say one player that reminds me of Marcus Rashford,” Herrera added. “I think he is already a top, top, top player but I think he will even improve with time in [his] decision-making and he will be unstoppable.”

Top, top, top player… Have we got the Spanish Harry Redknapp?