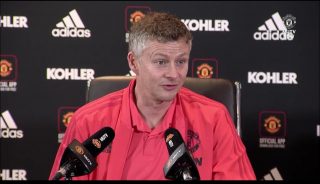 Ole Gunnar Solskjaer has revealed he is planning for the future at Manchester United.

Prior to Friday morning’s press conference, the club confirmed that Phil Jones had signed a four-year contract extension to remain at the club until 2023.

And Solskjaer made it clear at the beginning of the press briefing that he has a picture of what the current United team should look like in the coming years, confirming that he has spoken to Ed Woodward about it.

Solskjaer: ‘I’ve got a picture of what this Man United team should look in a couple of years and I put my views to Ed and the club.’ #mufc

That’s quite a statement from the caretaker manager, who is without question in contention for the full-time gig.

Solskjaer has already turned United’s season around with a top four finish back in the equation.