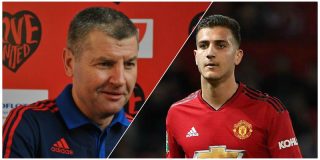 Last summer didn’t go the way José Mourinho wanted and it consequentially became a factor that led to his sacking in December.

It was clear after the World Cup when United met up for pre-season training that Mourinho wasn’t happy. Sat there with a sour demeanour in a press room, he didn’t look like he wanted to be there, and behind the scenes he found it difficult to open dialogue with Ed Woodward, who was often too ‘busy’ to take the manager’s calls when he demanded updates on transfer activity.

Woodward, it would seem, was trying to avoid Mourinho all summer. We brought in three signings – Fred, Diogo Dalot, Lee Grant — but not the centre-back Mourinho needed to sure things up at the back.

Dalot could be seen one day as the parting gift of José Mourinho. The 22-year-old has been used sparingly this term, but there are signs of a promising player.

It will take him time to adjust to the English game and, even with that mind, he only made 8 first team appearances for FC Porto in Portugal prior to his transfer to Old Trafford. First team football is still very new to Dalot.

The young Portuguese full-back is quick, strong, tall and tough in the tackle. He certainly has the attributes to make it at United should his development continue without any injuries getting in the way.

Legendary left-back at United, Denis Irwin, is another fan of Dalot and he singles out the youngster’s ability to play the ball into the box as his main strength.

“When he came and he was injured I didn’t know an awful lot about him,” Irwin told the Manchester Evening News.

“Obviously we jumped in to buy him and from what I’ve seen he looks a real, real good player.

“He played left-back in the game against Brighton and did really well. He’s more comfortable in the right-back position.

“His crossing ability is great, he’s only a young boy.

“It usually takes foreign young lads quite a while to settle and get used to the pace of the Premier League – particularly when they’ve been injured as well – but he looks like he’s a very good long-term prospect.

“He’s really solid [in his build], which is what you need for the Premier League. But from the bits we’ve seen of him he looks a real good player.”

The aim for next season should be to kick on towards starting more games ahead of Ashley Young.

Victor Lindelof is showing everyone what difference getting the first season out of the way can do with sublime performances in the heart of United’s defence.

United travel to Fulham this weekend. There’s a chance Young will be rested before United host Paris Saint-Germain in the Champions League on Tuesday night, so we could see Dalot in the starting line-up at Craven Cottage.