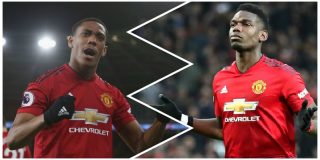 Anthony Martial will want to make sure his long-term future at Manchester United will bring him more success, especially after committing to a new five-and-a-half-year deal last week.

The aim is to get United back challenging for Premier League titles and a player of Martial’s ability belongs to a team capable of achieving such feats.

Martial also believes fellow Frenchman Paul Pogba can lead United to “great things”, while the pair were visibly held back when José Mourinho was in the dugout.

The 23-year-old now wants to bring silverware to the club.

“We all know what quality Paul possesses – Paul is Paul,” Martial told Sky Sports. “Now he has got this freedom to play with, I think we are beginning to see the real Paul Pogba play and let’s hope it continues.

“He is a leader, he talks more in the dressing room than he does on the field to be fair. Technically and with the spoken word, he is a leader in both senses. I hope he can continue to lead us to great things.

“I don’t think we are very far off the top four now so it is just a case of keeping going, winning as many games as we can so we can ensure a place in those Champions League spots at the end of the season.

“Any footballer would say the same thing, [my goal is] to win as many titles and trophies as possible, as much silverware as possible and it is also really important to keep developing, progressing and improving as a player over the years.

“I’d describe the period [since Martial has been at United] as really enriching for me as a person and a footballer. They have been good years, I’ve learnt a lot and I hope that I can continue to push on in the next few years as well.

“The fans and I have had quite a special relationship from my first season and fortunately, it has continued to last until now. I hope it continues into the future and let’s hope that together, we can win trophies and silverware.”

There’s every reason to believe Pogba can lead United to prestigious success — just look at the influence he had during an incredible World Cup campaign with France last summer, playing exceptionally in the final as Les Blues beat Croatia.

Martial has bagged two goals since Solskjaer replaced Mourinho and the former AS Monaco forward looks like he’s enjoying himself again.

“He [Solskjaer] is a coach with great values. I think he knows how to get the best out of players and he makes things clear so when we go out onto the field, we all know our jobs and we all know what we’ve got to do,” the boss added.

“He’s given me lots of advice. It’s always positive to get advice from a top player in his own right, but sometimes, when you’re out on the field, it comes down to what comes naturally to you and you do what you’ve always known how to do in terms of finishing.

“We have a laugh among ourselves quite often because I think finishing is something that comes naturally to me. I’ve played since I was a young kid, I’ve always been a footballer and a striker from that early age.

“The thing we laugh about is that I miss quite a few in training, whereas in a match, I may only get one chance and I manage to convert it.”

It shouldn’t be a surprise that Solskjaer is having such a positive affect on most of United’s attacking players. He was one himself and knows exactly what it takes.

Marcus Rashford has led the line up front with Romelu Lukaku pushed to the bench, while Jesse Lingard is learning new roles under Solskjaer, including the false nine. That proves Solskjaer is not a rookie tactically; he’s also gone away to Tottenham and Arsenal and won both games.