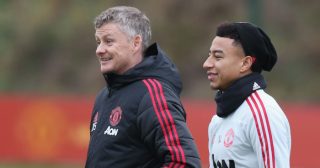 While Manchester United currently find themselves in a fight to finish in the top four, Jesse Lingard believes the team can battle for the title next season following their revival under caretaker manager Ole Gunnar Solskjaer.

The Norwegian remains unbeaten as United boss with a real possibility of him landing the job on a permanent basis.

United are positioned fifth – two points of fourth-place Chelsea – but Lingard is aiming for more next season.

We all want to see United lifting league titles, and this year’s title race is a hard watch considering it only really consists of Liverpool and Manchester City. Tottenham Hotspur will trail behind until the wheels really come off.

Lingard has revealed how Solskjaer’s approach is growing on the players.

“Solskjaer and Mike Phelan have brought back the old school Manchester United. They know the league and the club inside out so to pass that on and get us playing how we are has been perfect,” Lingard told the Mail.

“Solskjaer is doing very well. Nobody can fault him. He has taken a lot on but he already knew what he was doing when he came in. He got the players backing him straight away.

“He told us there are big expectations and pressure at this club but we have to deal with it and play like a real United team. We will challenge for the title next season if we carry on how we are now.”

It’s fantastic to see confidence back in the camp. Who knew after a month under Solskjaer the players would be talking about winning titles next season?

I feel United are some way off that point yet, though.

There are too many players that aren’t United standard that need replacing – and I don’t expect the club to get it all done in one transfer window.

Also if Solskjaer lands the job ahead of the new season, the honeymoon period will be over and the pressure will be greater. He got the job on an interim basis, which was basically a free hit at managing Manchester United, but Solskjaer has made it more than that.

The former United striker is a genuine contender for the job.

Mauricio Pochettino remains in the running, of course, but some fans are converting to the idea of appointing Solskjaer.