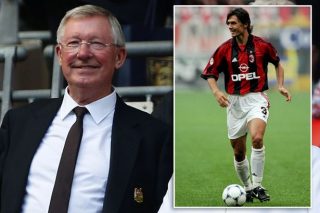 Sir Alex Ferguson managed some legendary footballers throughout his 26-years as Manchester United manager, but one star he missed out on was AC Milan defender Paolo Maldini.

The former United manager saw an opportunity to make a move for Maldini but was completely shut out when he spoke to the player’s father, Cesare Maldini.

“Well, I did try,” Ferguson said. “But when I met his father, he was quite formidable. I got a shake of the head, that’s all I got.”

By the sounds of it, Fergie and Maldini’s dad didn’t get into a deep conversation, with Cesare making his point very clear as to why his son wouldn’t be moving to Old Trafford.

“No, he did say: ‘my grandfather was Milan, my father’s Milan, I’m Milan, my sons are Milan. Forget it.”

Sir Alex Ferguson tells the story of the one time he tried to sign Paolo Maldini. He was shut down by Cesare Maldini:

And, like that, Ferguson left without getting his man.

Maldini played for AC Milan from 1985 to 2009 – making an incredible 647 appearances for the Italian club. He won the Serie A seven times, one Coppa Italia, five Supercoppa Italanas, five European Cups and five Super Cups.

The former Milan defender currently works as the sporting strategy and development director at the club, so he remains very attached to Milan.

Even if Ferguson missed out on Maldini, the legendary Scot signed his share of top-class defenders down the years — Jaap Stam, Rio Ferdinand, Nemanja Vidic, Steve Bruce to name a few.

Image courtesy of The Mirror.