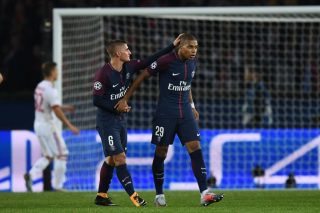 The Italy international has been out the past month after picking up an ankle injury in PSG’s 9-0 hammering over Guingamp.

Verratti had returned the training a week ago with PSG hoping he would be ready in time to face Manchester United in the Champions League, though that now looks a big ask.

But Tuchel spoke to the media after PSG beat Villefranche 3-0 in the Coupe de France.

“Marco was unable to finish training on Tuesday,” Tuchel said, as per ESPN. “He had problems, and I have to wait until Thursday to be able to take a decision over playing him against Bordeaux. Marco’s new issue is something else, but I do not really know much more.”

PSG will also be without talisman Neymar for Tuesday’s last-16 first leg with the Reds, as confirmed by the Ligue 1 club, though they’re still well-equipped in the attacking department with Kylan Mbappe and Edinson Cavani ready to put the sword to United’s defence.

Nobody saw United getting a result when the draw was made back in December, but that should change following the team’s resurgence under Solskjaer, coupled with big PSG absentees.

The French giants have been knocked out at this stage of Europe’s biggest tournament in each of the last two seasons. Should that happen again, Tuchel may be under pressure to keep his job.