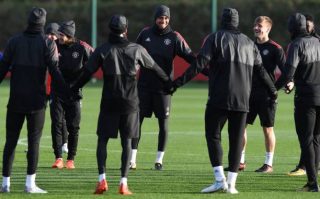 Ole Gunnar Solskjaer could have more options in defence when he picks his starting line-up to face Fulham on Saturday.

According to the official Manchester United website, Chris Smalling could return against his former club for Saturday’s early kick-off at Craven Cottage.

The England international has yet to appear under caretaker manager Solskjaer, having not played since the reverse fixture against Fulham in December, which saw former manager José Mourinho win 4-1 before before getting the sack.

Smalling picked up a foot injury in that game but has since returned to training. Now, it’s a matter of Solskjaer decide when the timing is right to throw him back into the team, with the official website hinting that could be this weekend.

The report adds that Argentina international Marcos Rojo has also returned to training.

While Smalling has been out injured, Victor Lindelof has become one of United’s most important players in a shaky defence, partnered by Phil Jones and Eric Bailly.

Solskjaer will hope none of his players pick up knocks ahead of an important Champions League knockout clash against Paris Saint-Germain next Tuesday, as well as upcoming matches against Liverpool in the Premier League and Chelsea in the FA Cup.

The boss speaks to the media on Friday morning and is expected to provide more team news ahead of United’s trip to Craven Cottage.