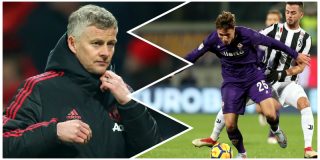 The 21-year-old has scored 10 goals and provided six assists in 24 games so far this season.

Fiorentina will be aware if their Chiesa continues to impress the way he has done this season keeping hold of him will become extremely difficult. Manager Stefano Pioli will hope the Serie A side get at least one of season out of him before bigger comes up their interest.

As reported by Calciomercato, via the paper edition of Corriere dello Sport, United join City, Real Madrid and Bayern Munich in the €60 million-rated attacker. They also claim that Inter and Juventus are in a better position to land his signature.

That list of potential destinations for Chiesa includes the biggest clubs in world football. At 21, he must be doing something right, and he has time to develop into one of the top attacking players in Europe.

Manchester United have also been linked with a move for Borussia Dortmund sensation Jadon Sacho, as per the Metro, with the former Manchester City academy product doing remarkably well in the Bundesliga.