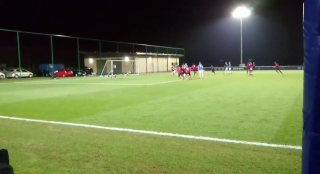 Manchester United U18s took on Everton in a must win game if they plan to win the league.

Everton had a player sent off in the first 20-minute and United took advantage immediately by dominating possession.

The Reds had a number of chances throughout the game but didn’t create enough clear-cut opportunities to mount a bigger win than they managed.

United scored the only goal of the game just before stoppage time after Mason Greenwood was fouled inside the box. Welsh youngster Dylan Levitt stood up and slotted his penalty into the back of the net to secure the win.

The U18s are currently fourth in Group North – two points of league leaders Everton, who didn’t take their chance to extend their lead at the top.

Hopefully, the boys can keep winning games and rise closer to the top of the table in the coming weeks. They’re a talented bunch.

YouTuber MxZvGx has provided individual hightlights of several performances from the win over the Toffees, including the highly-rated Greenwood, Aliou Traore and Largie Ramazani.