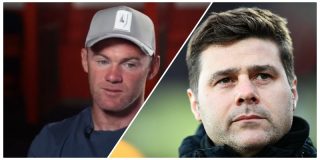 Wayne Rooney has backed Mauricio Pochettino to be the next Manchester United manager, if the club do not appoint interim boss Ole Gunnar Solskjaer.

Solskjaer has made an almost perfect start at Old Trafford since taking temporary charge, winning 9 out of his first 10 games. The impressive transformation in results has left many calling for the Norweigan to be named permanent boss this summer.

Rooney, United’s all-time top goalscorer, would be pleased if Solskjaer was to be handed the manager’s job.

“Ole Gunnar’s a fantastic person. I think the club will have a decision to make at the end of the season, and it’d be nice to see if Ole’s going to continue with this form, and get a shot at the job on the permanent basis,” Rooney told CNN.

Tottenham manager Mauricio Pochettino had been front runner for next manager after the sacking of Jose Mourinho, and Rooney thinks he would be the ideal candidate if United were to look externally for alternatives

“If if not, if the club go to choose from somewhere else, then I think Pochettino would be the right guy,” Rooney added.

Pochettino is still seen as the natural choice for United, and is keen on replacing Mourinho as manager at Old Trafford. Though doubts still remain over the Argentine’s lack of silverware. Spurs have been knocked out of both domestic cups in recent weeks, and Pochettino will go another trophy-less year at the club unless they miraculously pull off a Champions League triumph.

Meanwhile, Solskjaer’s true managerial credentials at United are still to be uncovered. He is set to be tested this month with the huge Champions league tie against Paris Saint-Germain, a league game against leaders Liverpool, and an FA Cup tie away to holders Chelsea.