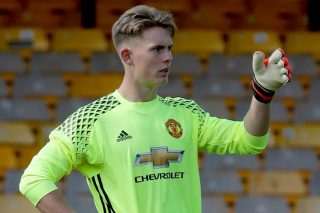 The England U-21 international is currently impressing on loan at Championship side Sheffield United, with the Bramall Lane residents pushing for promotion to the Premier League.

It is also reported that Premier League sides Arsenal and Tottenham Hotspur have been keeping an eye on Henderson’s progress with The Blades.

Henderson signed a new two-year contract at Old Trafford last summer and United have the option to extend that deal by an extra year, which could come into play if clubs from around Europe continue sniffing around the shot-stopper.

The report suggests Bayern and Juventus are already preparing offers for Henderson, with a possible summer transfer now on the cards.

It is going to be difficult for United to promise Henderson minutes in the first team with David de Gea first-choice and Sergio Romero always ready to fill in as backup. That has also contributed to the fact that he’s not yet made a senior appearance for the club and was sent on loan to the Championship to gain first-team experience.

Reported interest from these clubs must mean Henderson is doing tremendously down in the Championship, and United are undoubtedly looking forward to monitoring his developments at the end of the season.

A bid from one of the big clubs mention could easily turn Henderson’s head.

Obviously at Bayern, Henderson would at least fall behind Manuel Neuer, so the grass isn’t always greener.

Time will tell if Henderson is willing to bide his time and accept more loan moves rather than a permanent switch elsewhere.