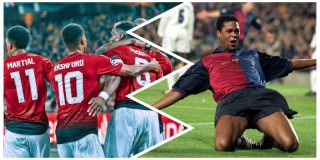 Barcelona legend Patrick Kluivert has admitted he would like to see Marcus Rashford sign for the La Liga champions.

However, on Tuesday, Sky Sports revealed United had opened talks with the striker over a new contract. His current deal expires in 2020, so the club know they need to work on fresh terms before the likes of Real Madrid and Barcelona step up their interest.

Stretty News understands that Rashford sees his long-term future at United. Sources close to Old Trafford claim he much happier now, getting a chance to play as a centre-forward, whereas under former manager José Mourinho the England international played second fiddle and was often shoehorned into wider positions.

Kluivert, who has admitted he’s a fan of Rashford, believes it will be difficult to take him from United.

‘I like Marcus Rashford a lot,” Kluivert told Sport 360.

‘It will be really difficult to get him over, but he is a good player.’

Hands off – Rashford is going nowhere and the sooner he renews his contract at United the better!