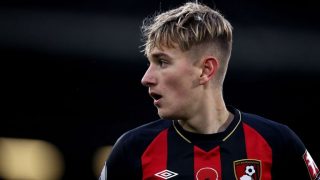 David Brooks has made a dream start to life in the Premier League down on the South Coast. The Welsh international’s exceptional performances for Bournemouth have not gone unnoticed either, with the Mirror suggesting Man Utd could be set to battle it out with Spurs for the talented youngsters’ signature.

Here is why the Reds should make a move for Brooks this summer:

Brooks, 21, has fitted seamlessly into Bournemouth’s setup since his move from Sheffield Utd last summer. He has registered 4 assists and 6 goals this season, as per WhoScored, an excellent return for a player in his first season in top flight football. His growing influence on the team was underpinned by Eddie Howe after his sides away loss to Cardiff last week.

“David has done very well this season. He has a creative eye and an ability to find the right pass at the right moment and that was missing for us today. We missed his intelligence and ability to pick up good positions in attacking areas.”

Brooks’ also boasts an immense work rate and is lively on and off the ball in Howe’s side, working tirelessly to regain possession before immediately looking to attack. He was Bournemouth’s only bright spark in their defeat to United at Old Trafford last month, providing an assist for Nathan Ake’s goal.

Ex-Man City academy graduate Brooks has the potential to solve United’s long standing issue on the right. Though not lightning fast, Brooks is agile and deceptively quick cutting in from the wing. His decision making in the final third is spot on more often than not, and the player is mature beyond his years, making him an exciting prospect for hierarchy at Old Trafford.

Luke Shaw and Anthony Martial are starting to provide great balance down United’s left, though weaknesses remain down the right hand side. United are one sided in much of their play, and Brooks could provide width down the right, adding an extra dimension to the attack. Juan Mata’s contract runs out this summer and lacks the pace required on the flanks, and Alexis’ inconsistent performances can not be relied upon either so it is certainly an area which needs addressing for the new manager this summer.

Brooks represented England at youth level, and was named best player at the 2017 Toulon Tournament, an event in which England’s under 20 side won. However, he switched his international allegiance last year, qualifying for Wales through his Llangollen-born mother. Brooks has made 9 appearances for his national side, and has already become a key player in the squad alongside several other young Welsh talents in Harry Wilson and Tom Lawrence. Gareth Bale was even outshone by the youngster in their recent Nations League defeat to Denmark.

United legend and current Wales manager Ryan Giggs told the BBC in November that it would have been a ‘disaster’ if Brooks had chosen to represent England.

“He might have made the England squad had he not come to Wales… he is a talented player who is now scoring goals as well as performing well. “He’s an intelligent player who can play in different roles across the front three and even in the deeper role,” said Giggs.

Giggs certainly knows a thing or two about attacking talent, and would no doubt encourage a move to Old Trafford for the youngster.

Brooks would also qualify as another homegrown player in all competitions for United. The Welshman has the potential to be a key component in a future United attack spearheaded by Marcus Rashford. The Reds do not want to see another young British talent, like Dele Alli at MK Dons, escape their gasp at the hands of another Premier League rival.

Although the £50m touted by the Mirror seems excessive for a player who has spent just one season in the top flight, it is worth United taking the risk. Specialists on the right-flank are scarce and Brooks has the talent to occupy the role as he develops further, as well as the raw ability to lift fans at Old Trafford from their seats with his natural attacking flair.